The Proper Distance to an Online Friendship

The Proper Distance to an Online Friendship
~ miscellaneous musings and random thoughts! ~ 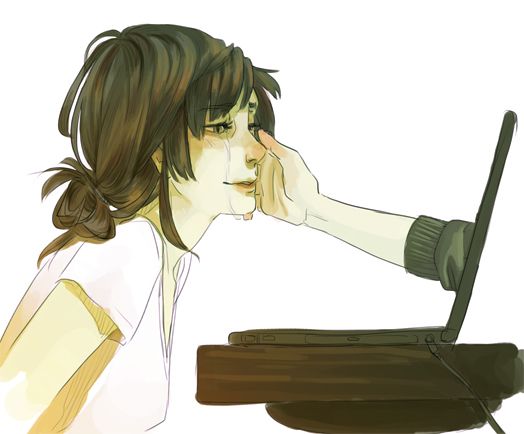 ​
+ + +​
This blog post is dedicated to @Nyann and some others for reminding me that I haven't written a blog post in a while! Additionally, these thoughts have been stewing in my head for a while, so I thought I'd stay up late tonight and finally put some of these squishy incoherent thingies to digital paper.

As usual, I'll probably write some grand generalizations and leave a story behind or two, but apparently my writing style is pretty distinct so most of you all are probably familiar with this structure already. Now, without further ado...

​
The majority of us here grew up in a digital age.

We spent our teenage years on the Internet and may (or may not) have been "addicted" to electronics of some fashion.

Everyone owns a mobile phone, and some of us might say that we can't live without it.

The digital era is often written in textbooks as a time when globalization led to sudden interconnectivity all of the world. Modern communication technology made it possible for my mom to instantantly call her sister halfway across the world whenever she liked, and it allowed me to video chat (almost every day) my significant other during the four years we spent in a long distance relationship.

Many people claim that we are more interconnected with each other than decades or centuries before.

However, numerous articles and research studies claim that our generation is more lonely than ever before.


So here's the big question:

Why is there this big paradox? How does greater interconnectivity lead to more loneliness?


+ + +​
I started thinking about this question around four weeks ago when I was procrastinating and toying around with an anonymous chat roulette site called Omegle (yes, I do, in fact, use Omegle occasionally, although it's probably not what you think -- I picked up the hobby in college but that's a story for another time). Additionally, there was some threads and other occurrences on NUF about online relationships, so the topic was somewhat on my mind.

Anyhow, onwards with the story.

However unexpectedly I ended up meeting someone who somehow managed to guilt me into adding them on discord.

The details are somewhat irrelevant, but basically it was a very troubled person that unexpectedly had issues that hit somewhat closer to home than usual. In particular, she had a rare chronic illness that was relevant to my medical studies, and I learned a lot by talking to her and learning about her experiences. She also reminded me of some difficult times I experienced in the hospital.

In a sense, it was this blurry mixture between intellectual curiosity, empathy, regret, and a helpless desire to fix things.

She -- let's call her Kohi - was the kind of person who had a body that caused unrelenting suffering. Although she had her good days, she was frequently in a bad mood and often lashed out at anyone who was close to her. Consequently, she frequently burned bridges in her relationships and had almost no friends -- and in fact developed a complex for distrusting people because she thought that people who she thought was her friend would inevitably "betray" her and hatefully call her an "asshole".

Frankly, she was a terrible mixed bag of a lot of bad things and trauma. And honestly she was not very pleasant to be around -- and stressful in many regards. If anything, I actually had a horrible impression of her in the very beginning.

Without really thinking of the consequences, I subconsciously slipped into "work" mode and sought to understand her thoroughly. She had an enormous mountain of baggage, and I wanted to parse through that all and overcome my early prejudice for her. After all, it wasn't appropriate for healthcare workers to develop prejudices against patients, so I wanted to train my feelings in a sense. Additionally, I have this personal philosophy that almost anyone is relatable and understandable if you talk to them enough.

Consequently, this began my naive month-long journey into the strangest friendship(?) I have ever held online.

​
I'll spare you the details, but it was pretty rocky.

I learned... a lot about her. And likewise, she about me.

There were multiple times where I thought things would explosively end there, and there were multiple times where I was confident that there was no reason for me to keep talking to this volatile person. In the beginning, I thought that there was no way that our personalities could be any more incompatible. The friction was ridiculous and unlike any other person I've put effort into interacting with before.

I also needed to reconsider the way that I viewed things multiple times. After the first week, I stopped thinking of her as a "patient" and all of that mentality dropped to a more casual relationship.

However, unexpectedly... we ended up something remotely resembling friends.

Somehow, we ended up brute-forcing ourselves to that point.

Well, to some extent it was by sheer volume of interactions.

Kohi by some regards was almost starved and desperate for any kind of social contact.

I've never met anyone as sheerly lonely and isolated as she was.

Similar to how there is the stereotypical NUF extreme of the addicted nuffian who spends all day long on profile posts and is the queen butterfly who is instantly able to appear on any interesting conversation of note -- Kohi gave off the kind of impression of someone who immediately responds as soon as you message her.

Furthermore she was the kind of person who got easily upset if you ignored her for too long (although she was not the type of person to say it directly). She would also periodically message you aimlessly talking about what she was doing if you ignored her for more than a few hours. In this sense, she was the epitome of clingyness that I've never met in a person before.

Well -- I've seen clingyness in romantic situations, but this was something on another level, since it was just an ordinary friendship. Or was it even a friendship? We were barely more than acquaintances yet she seemed to approach our faint connection with a level of ferocity that certainly felt abnormal.

For weeks I ended up glued to my phone -- almost to the point it was impossible to put down.

There was always something to reply to, and always something to talk about. In this sense, Kohi was an excellent conversationalist. There was always another topic or another question that I was interested in enough to engage with. Furthermore, she was self-aware enough to attempt to hold back, saying that she was was "sorry" for being "annoying" or "irritating" or "bothersome".

I did not dislike her, fundamentally speaking.

However after a month of interactions, I could fairly confidently say two things:

A combination of these two things were the most challenging thing that occupied my thoughts frequently. Despite this, overall I would say that she was nice to talk to and generally speaking a good person.

​
...Which brings us back to our main subject.

Over the past four weeks, I have probably spent more hours messaging Kohi than the cumulative time that I've interacted with the majority of people that I know on NUF. She knows just as much about me as the close group of friends who are in my personal group PM on NUF, although we've only known each other for a tiny fraction of the time.

We have a very peculiar and unusual friendship that I'm unable to pinpoint -- we don't share any interests, and objectively speaking it is difficult for me to say if there are obvious discrete qualities that I definitively like about her.

However, we talk a lot and I do believe she's fairly trustworthy.

Yet at the same time, sometimes I feel like this is unsustainable.

Who can keep up with a relationship of this intense pace?

As for me? I'm pretty slow and leisurely and introverted by nature.........

(I mean, I kind of want to read sometimes without being interrupted with *beeps*?)

I never quite appreciated until recently how scary it is to have a "friend" who never leaves your side.

It's a little bit of a terrifying idea to consider.

Imagine having a friend who was too close, always present, and always talking nonstop.

Maybe there wasn't anything specific that you disliked about her, and in fact you do like talking to her sometimes. However, it's rather difficult to define boundaries with an over-enthusiastic friend in an online space short of ghosting them or pretending you didn't see their message.

Ultimately it can leave a rather sour taste when originally it would have been no issue.


+ + +​
Someone on NUF once said (sorry if I forgot who) that online relationships (romantic or not) are fleeting and ephemeral. In my own personal experiences, this has generally been true for me as well.

Because it's so easy to be glued to the screen, three years online feels like three decades.

Without being careful with ourselves, it's easy to over-invest ourselves in online spaces. Before you even know it, suddenly 15 minutes becomes three hours, and you've invested the emotional IRL equivalent of three days. It results in this odd phenomenon where I can't remember any of my middle school classmates in real life, but I vividly remember the online friends that interacted with in middle school.

The world ends up really skewed.

It's hard to grasp and comprehend to some extent.

The pacing seems kind of twisted to me. When the temporal proximity of friendship grows too close too quickly, things rip ahead too fast, time advances at 100X speed, and the absence of barriers results in something that feels somewhat flimsy and primitive.